Mal-Employment Problems Among College-Educated Immigrants in the United States

This paper examines the extent of underutilization that occurs among employed immigrants in the form of mal-employment.

This paper examines the extent of underutilization that occurs among employed immigrants in the form of mal-employment. Mal-employment occurs when college graduates are employed in occupations in which they do not use the knowledge, skills, and abilities that typically are developed through a college education. For example, college graduates waiting tables or working as receptionists or retail salespersons are mal-employed. College-educated immigrants who are mal-employed do not utilize to the fullest extent the human capital they acquired with their college education and so have annual earnings sharply below their counterparts employed in college labor market (CLM) occupations. Understanding the extent of mal-employment among different groups of college-educated immigrants, particularly among those with foreign college degrees, can provide important insights to guide policies targeted toward reducing barriers to the full integration of college-educated immigrants into American labor markets.

This paper will assist users in better understanding labor market underutilization problems among the employed college-educated U.S. immigrant population. It can provide insights that could lead to policy development to not only increase employment opportunities of immigrant college graduates, but improve the quality of their employment to more fully utilize their college education. It also will assist the Department of Education in determining the need for a better understanding of the quality of college degrees from home countries of U.S. college-educated immigrants and for programs to improve college-educated immigrant integration into the U.S. workforce through various types of training (e.g., ELS, job search efficacy) and/or retraining programs. 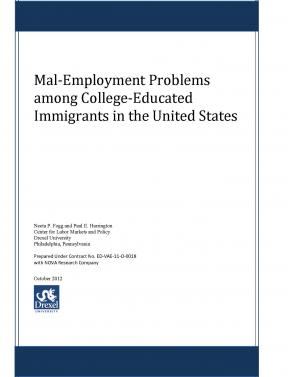