This report summarizes the information presented during the first National Summit on Justice Reinvestment and Public Safety on January 27, 2010. The report highlights the promising practices and the latest thinking on criminal justice policy. This information is meant to spur the expansion of data-driven practices. The report is meant to serve as a "best practice" manual for policymakers and corrections professionals.

The Council of State Governments Justice Center and partner organizations convened the National Summit on Justice Reinvestment and Public Safety on January 27, 2010, in Washington, D.C. Supported by members of Congress on both sides of the aisle, the goal of this meeting was to highlight data-driven, fiscally responsible policies and practices that increase public safety and reduce recidivism and spending on corrections. The summit also was meant to facilitate information exchange and highlight the latest research from across the country. Congressman Frank Wolf (R-VA), Congressman Alan B. Mollohan (D-WV), and Senator Sheldon Whitehouse (D-RI) helped support the national summit, which included more than 300 attendees representing law enforcement, courts, corrections, policymakers from every level of government, and experts in reducing recidivism and employing justice reinvestment strategies. This meeting was the first of its kind held on Capitol Hill to address
these topics on a national platform. Criminal justice experts and researchers presented data in a manner that stimulated thoughtful questions and meaningful discussions.

Justice Reinvestment Summit Report
This report summarizes the remarks, research, and case studies highlighted during the summit. It is meant to assist Congress and practitioners by providing a concise articulation of four key “what works” principles to reduce recidivism and increase public safety. Chapter 1 provides an overview of the challenges facing American corrections. The number of individuals incarcerated or under supervision is high, and states generally bear excessive costs related to this population. Despite the money expended, in many states the problems of incarceration and recidivism are getting worse, not better. However, policymakers armed with data-driven research based on evidence culled from their specific states are better equipped to make decisions that are both cost effective and enhance public safety.
As described in chapter 2, there are important principles that underlie creating costeffective corrections policies and programs. This starts with identifying those individuals who are likely to pose the greatest risk to public safety. Using the proper risk assessment tools enables criminal justice practitioners to evaluate individuals who are incarcerated or under community supervision and target those most likely to reoffend. The most effective corrections programs are based on models that have demonstrated success. Logical, researchbased supervision practices deliver the greatest return on taxpayer dollars. Examples of
effective policies, practices, and programs are provided in this section.

Case studies of statewide efforts in applying the justice reinvestment approach are presented in chapter 3. The process of implementing the approach is outlined, beginning with data analysis, followed by adopting policies and enacting strategies, and ending with performance measurement. Four states that adopted the justice reinvestment approach are highlighted: Texas, Kansas, Arizona, and New Hampshire. Each case study underscores how the approach can be implemented and adapted to suit the specific state’s needs.

Chapter 4 concludes with a snapshot of useful national resources. Federal efforts to reduce recidivism and support state and local reentry efforts, such as the Second Chance Act and the Criminal Justice Reinvestment Act, are highlighted as well.

Some repetition of key themes in various sections of the report is by design—reflecting the interdependent relationships among major principles.

According to a reviewer, this source does not explicilty address concerns regarding education, but rather covers policy and logistics to a larger degree.

This resource is more broadly based in it's coverage than some others that we've seen. It emphasizes the value of identifying and implementing evidence-based practices in the field of corrections generally, and specifically looking at ways in which to reduce recidivism and spending, education is the common thread. So the applicability in terms of adding support for allocation of funds and/or resources is expansive.

While education is mentioned in the report, it is not a report about education.  I don't think that teachers, students, or anyone in the system deciding about education programs and dollars would go to this report to get their information.  On the other hand, it is thorough, well-written, with a lot of pertinent data on many areas of corrections from early paroles to substance abuse programs.  Prison administrators and legislators would be interested in the points explored, the data presented, and the conclusions reached. 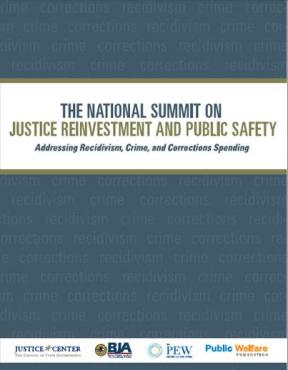