Building Career Pathways for Adult Learners: An Evaluation of Progress in Illinois, Minnesota, and Wisconsin After Eight Years of Shifting Gears

The Joyce Foundation extended Shifting Gears funding from 2012 – 2014 (referred to as SG 3.0) in Illinois, Minnesota, and Wisconsin. These states had committed to expanding adult education bridge programs to increase the number of students transitioning into postsecondary education. Such bridge programs are designed to link and integrate basic academic skills with postsecondary occupational credit-based learning in key industry sectors. These bridge programs typically involve contextualized curriculum and instruction, career development, and enhanced student services and supports. Often they are directly connected with additional postsecondary courses as part of a career pathway that leads to postsecondary credentials and degrees.

The Foundation also committed to evaluate the progress of these three states in order to document the expansion of adult education bridge programs and the increased number of participants served. A key aspect of this evaluation was to learn how state systems scale adult education bridges, and to identify key factors that enabled or hindered progress toward scale. This report examines the progress made in each state from 2012 – 2014, and also briefly reviews how the Shifting Gears work influenced the national discourse on increasing skills and credentials for adult learners. The evaluation reached five primary findings:

• Illinois, Minnesota, and Wisconsin doubled the total number of their bridge programs from 79 to 196 between SG 2.0 to SG 3.0. This growth includes expanding adult basic education bridge programs to more adult education providers and more community and technical college campuses.

• Each state effectively institutionalized its adult education bridge program as an ongoing option to address the educational and skill needs of low-skilled adult learners. Altogether, the number of participants served more than doubled, from 4,000 during SG 2.0 to 10,345 during SG 3.0.

• In two of the three states (Minnesota and Wisconsin), important policy changes expanded financial resources available for adult education bridges, and created the foundation for further advancing adult education bridges. These changes included reallocating current resources as well as new state funding dedicated to sustaining the expansion of bridge programs. Minnesota now has an $11.2 million allocated fund for career pathway and bridge programs in the biennium budget and Wisconsin has a $4 million annual fund to support these same program approaches.

• Scale was not achieved during this period in terms of serving many or most of the low-skilled adults who might benefit from bridge programs. Altogether during SG 3.0 the three states served less than five percent of the adult learners in need. States grew their programs opportunistically rather than setting intentional goals and strategies around scaling.

• The work of Shifting Gears positively influenced the national discourse on workforce development. The goal of helping adult learners increase their skills and earn credentials is now widely embraced in the workforce field and can be found as a core principle in the recently reauthorized federal workforce development legislation, the Workforce Innovation and Opportunity Act (WIOA).

Overall, after eight years of investment, the evaluation concludes that the Shifting Gears initiative made demonstrable progress in three Midwestern states in terms of expanding adult education bridges and serving low-skilled adults effectively. In addition, research conducted by Minnesota and Wisconsin suggests that Bridge program students transitioned to college and earned postsecondary credentials at a higher rate than students in traditional adult basic education programs. Furthermore, the focus on career pathways and aligning state adult basic education, workforce, and community and technical college systems influenced national and local thinking on workforce development across the country. In doing so, Shifting Gears contributed to a better understanding of the importance of addressing the educational and skill needs of low-skilled adults, the strategies and actions necessary to do so, and the challenges in sustaining and scaling efforts to achieve significant impact.

Building Career Pathwys for Adult Learners: An Evaluation of Progress in Illinois, Minnesota, and Wisconsin After Eight Years of Shifting Gears has an excellent and extensive list of research studies, data and  documents to support the need for the importance of education, workplace skills and bridge programs in every state.

The experimental research base that went into this study was extensive and thorough because of detailed data recorded over a period of five years in 3 different states.  Each state "tweaked" their implementation of building a "bridge" program that was best suited for their state's culture and workforce population.

This is a useful evaluation study on a pressing topic. The methodology is qualitative, which was appropriate for the questions being asked. The study provides rich information that will be useful to adult literacy researchers and practitioners. 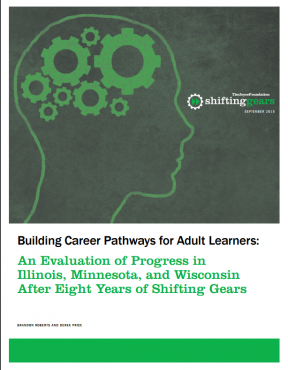